Vale Of Clwyd Half Marathon

Since arriving back in the Uk I have been looking around at new events that I hadn't raced before, and as you can imagine there wasn't much left for 2014 as we was quickly approaching December but a quick ask on Facebook and a good friend of mine Paul Brooks mentioned a Half Marathon in Denbigh what was a relatively new race on the scene.

I had actually forgot about the race till the afternoon on the day before. After a quick email to sort entries and a lift from Ruth sorted both myself and Gem was good to go the next morning.  Race morning was a little chilly but dry and crisp (perfect running conditions) on arriving at the venue there was a slight spit of rain in the air but thought nothing of it... 5 minutes to go before start we all stood on the start line and the heavens opened up not only with rain but heavy hail! That moment it finally hit me that I was racing back in Wales and not in Canada, Hawaii or Australia like I had been doing for the last 12 months.  But to be honest I do enjoy the tougher weather as it makes it more of a challenge and ultimately more satisfactory once finished.

10:00am and we were off, I decided that I would try and go with the leading group of runners from the start to try and get a feeling for the race as I had been away so long many of the faces I didn't recognise.. There was soon a group of 4 runners (including me) off the front of the field battling into the driving hail was what coming down at the time. 2km into the race 2 of the 4 runners dropped back a little what left myself and a North Wales Road Runner (Martin Green) to race it out. Now I did know of Martin and how well he was running recently so I decided to try and stick with him and go on when I felt I could.. This moment come sooner than I thought! We was just approaching the 4km  mark and I was feeling really good and decided to make a break for it up a climb where I thought I can use my strengths here to hopefully break away. 2nd place did come up the climb behind me but I had decided to kick again on reaching the top what gave me a little gap away from Martin. Everyone who runs can relate to this but as soon as I broke away the first thing I thought was 'I'm along way from the finish and now alone" but I think with doing all the Ultra running my mind has become stronger and I continued to push on hard to try and get away as much as possible just in case my legs gave up the ghost further down the line as I hadn't really been running with speed for a very long time!!

The KM's passed by and I was still working hard, fortunately by this time the hail had stopped and the sun was trying to come through. I contiuned to chase the lead car what was out in front down the course, mentally I used this to my advance thinking to myself it was a lead runner I was working to catch.. As I went through 16km (10 Miles) at 57 minutes I knew then that I was running well and still felt strong, not enough to go quicker but well enough to maintain my pace to the finish what should of seen me come in around 1:15ish! The final 5km of the course did actually slow me down a little as a few more hills appeared from somewhere and my legs started to feel a little sluggish but by this time I was determined not to loose the lead.

As I approached the village of Llandyrnog where the start and finish of the race took place the sun was nice and warm and I was still working for that 1:15 finish time, a run down the road and a sharp turn into the finish I crossed the line in 1:15: 59 just in within the time I wanted.. I was pleased to have held on and finished in my time frame, JUST! Topped off with finding out I had broke the course record from the previous years too! The afternoon just got better too as Gem come over the line in a new personal best of 1:31.

Thanks to Joe and the guys/volunteers for putting on a great little race and to Ruth for taking us and her support. And that finishes off my year of racing till January 2015.. I'm looking forward to over eat and get fat for the rest of the year :-)

Thanks for following and reading.  Race director report below:
Paul x 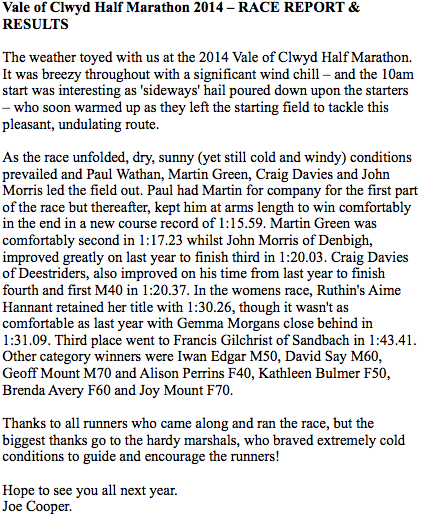